The novel object recognition test was introduced by Ennaceur and Delacour in 1988, in order to assess the ability of rats to recognize a novel object in an otherwise familiar environment [1]. Since then, the test has become popular for testing object memory in rodents in general and the effects of amnesic drugs on exploratory activity in particular [2]. EthoVision XT offers several features designed to automate the test procedure and automatically measure and analyze behavioral parameters related to the novel object recognition test.

In the first phase of the test, the animal is confronted with two identical objects, placed in an open field, in order to get familiarized with the objects. In the second phase, the animal is exposed to two dissimilar objects placed in the same open field: one familiar object, used in the first phase, and one novel object. In this phase, the time spent exploring each of the objects is measured. Non-amnesic animals will spend more time exploring the novel object than the familiar one. An absence of any difference in the exploration of the two objects during the second phase can be interpreted as a memory deficit or, in case of testing an amnesic drug, a non-functioning drug.

Traditionally, exploration of an object is defined as time spent with the head oriented towards and within two centimetres of the object [3]. To be able to measure this parameter, it is necessary to know the head position of the animal. This is exactly what EthoVision XT is capable of: the system automatically records the position of a rodent’s nose, relative to spatial zones or objects.

In addition to the ability to nose point track rodents, EthoVision XT offers several other functions that enable you to automate the novel object recognition test. This leaflet shows how to use these functions in order to obtain reliable results.

With EthoVision XT you can define independent variables such as treatment, animal code, age, or any other factor beforehand. This is particularly important for the object recognition test, since it enables you to compare the memory performance of drug treated and non-treated animals during the analysis phase. Zones of any shape can be defined directly over the image of your open field, which allows you to define the novel and familiar object as separate zones. Subsequently, EthoVision XT will measure the time the animal spends with its nose towards and within a short distance of these zones and, thus, the time the animal spends exploring the separate objects. EthoVision XT can also automatically measure elongation of the rodent’s body, a parameter frequently used to investigate exploratory behavior. By setting elongation thresholds, you can define different degrees of this behavior as ‘stretched, ‘normal’, or ‘contracted’. 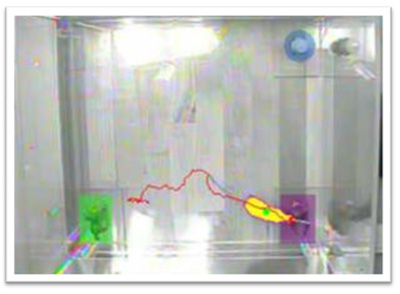 Simply release your rat or mouse in the open field and EthoVision XT will do all the work. You can choose to only visualize the track belonging to the nose point of the animal or to visualize tracks belonging to the body center and tail base as well. EthoVision will automatically calculate the time the animal has spent with its nose towards and within a predefined distance of the object. Some researchers assume that an animal exhibits a strong preference for one of the objects in case it has been exploring this object for 38 seconds or longer [2]. It is conceivable that you would like to stop tracking when an animal has developed a preference for a particular object. You can instruct EthoVision XT to automatically stop tracking whenever an animal has been exploring an object for 38 accumulative seconds, or any other desired time period’. Analyze your data The main parameter to be measured in the novel object recognition test is the time the animal has spent with its nose in the zones belonging to the different objects. In addition to this parameter,  EthoVision is able to automatically calculate the time spent with its nose in a particular distance to this zone. To examine possible differences in motor activity or motivation, velocity and the total distance moved are frequently measured in the novel object recognition test [2]. EthoVision is perfectly able to automatically measure this as well. The novel object recognition test is often used to investigate the behavioral effects of amnesic drugs. In order to compare results of treated and non-treated animals, you can group your data by an independent variable (e.g. treatment) and obtain statistics for each separate group. You can easily visualize and replay the path  covered by the animal on your screen, including synchronously recorded external data streams such as heart rate or body temperature. You can even simultaneously visualize the acquired track and the video on which the track was originally based, to enforce your research results. Visualized paths and calculated parameters can be exported to other programs (e.g. PowerPoint) for reporting and presentation purposes In addition, for inferential statistics and hypothesis  testing, a number of export formats are provided to analyze your data in spreadsheets and statistics programs, such as Excel and SPSS. 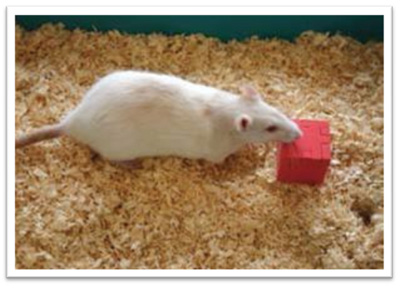