USF Health Research Day 2012 began even earlier than expected, as organizers let presenters set up their posters in the Marshall Center the night before the Feb. 24 event. The reason: to accommodate the record-number of researchers participating this year.

A record 340 presenters participated in the 22nd Annual USF Health Research Day, an event that showcases the work of graduate and postgraduate students and residents, and even faculty and staff, from throughout USF Health, as well as across campus.

In addition to the 340 from USF, 16 students from a high school and middle school charter school in The Villages attended, showcasing their own award-winning posters. The young students posters were judged by USF post doc students. Villages teacher Shelbie Wiley said she was thrilled her students were able to participate and that the trip was formed out of the recent partnership between USF Health and the Villages. USF professor Duane Eichler, PhD, who lives in the Villages, judged the young students' work at their science fair and helped coordinate them coming to USF Health Research Day. 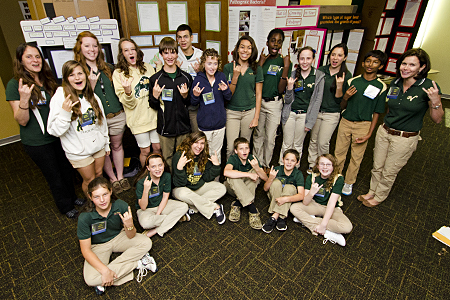