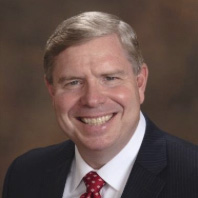 John R. Robinson, is Associate Vice President and Chief of Staff for USF Health. He has functioned as the Chief Communications Officer at USF Health since 2015, overseeing communications and marketing of USF Health’s four colleges and clinical practice plan. Previously, he served as a Colonel and Director of Communication at US Central Command as part of a 30-year career in the US Army.

During his military career, he provided and supported strategic communications in many areas of the United States, Europe, Africa, the Middle East and Central Asia.  His service included work in multiple combat zones and with many US Embassy teams.  He helped oversee construction of the Coalition Press Center used at the beginning of Operation Iraqi Freedom, functioned as the primary trainer for OIF’s initial spokesperson, and orchestrated the daily production and broadcast of the OIF global media briefing. He also served in the Pentagon, where he managed web, broadcast and print media for the Army, and served as the Army Public Affairs Director of Planning.

He holds an MA in Journalism from Marshall University, and a Master of Strategic Studies from the US Army War College.