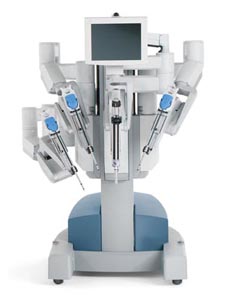 The da Vinci robotic camera consists of two high definition cameras. Just like your eyes produce a true 3D color image so do the cameras of the da Vinci robot. This picture is visible to the surgeon seated at the da Vinci console by viewing the twin high resolution, high frame-rate eyepieces. The endoscope picture magnification of up to 12x can be achieved with these cameras of conventional laparoscopic cameras. These components constitute the Insite-Vision System, by Intuitive Surgical, one of the most advanced vision systems available. A central robotic arm positions the camera and lighting exactly where the surgeon wishes it, because it is operated by the surgeon by foot pedals as he/she is comfortably seated at the console. The camera can be placed within a few inches of the prostate during surgery thus allowing for better dissection during the operation. In addition to the 3D camera there are two different cameras are also available for the da Vinci system. They are: a straight, and 30 degree oblique. The oblique camera can allow the surgeon to peek around the corners and to partially see underneath the prostate.

Although visually similar to standard endo-wrist image laparascopic instruments, the robotic instruments have the additional advantage of being articulated. The allows the instruments not only instruments image to open and close but to fully turn and twist, allowing more natural mimicry of the human hand and wrist. Unlike your hand these instruments are much smaller. Many of the jaws of the tools are similar or shorter in length than your fingernail. This allows very small and precise incisions to carefully dissect out the prostate.

Standard laparoscopic instruments are manipulated counter-intuitively or 'backwards'. The surgeon operates one end of the instrument which acts like a lever-push one end down and the other end goes up. Push right to make the instrument go left. This is similar to a teeter-totter, where the center is the port or entrance to the body cavity. Thus for standard laparoscopic procedure, the surgeon has learned to operate essentially backwards. The Da Vinci robot does not have these limitations. The robot-slave technology translates a surgeons hand movements exactly as he or she does. Turn your wrist right and the articulated robotic wrist turns right; go up, the robot wrist move up all in three dimensions. The robot also allows the surgeon to make large hand movement at the console that can be translated into a micro precise dissection. The robot can also filter out hand tremors, enhancing precision when compared to standard laparoscopy. Another of the many benefits of this system is that it significantly reduces surgeon fatigue associated with traditional laparoscopic prostatectomy by allowing the surgeon to remain in a natural, comfortable position while operating.

The enhanced visibility and magnification of the robotic cameras aid the surgeons in finding small 'bleeders', which translates into lower blood loss. Now surgeons can keep blood loss to a minimum, which means an increased clarity of vision to more carefully identify essential anatomy of the prostate, the nerves and blood vessels which may aid potency.