Stiles is general contractor of the air cargo project, which began in June 2011 and is scheduled for completion in October this year. Situated on 45-acres at the Miami airport, the project is comprised of demolishing an existing warehouse, constructing an air cargo terminal, and remodeling two existing warehouses. New construction totals 500,000 square feet. On any given day, 30 subcontractors and 150 employees can be found working throughout the site. It is estimated a total of 65 subcontractors will work on the entire project. 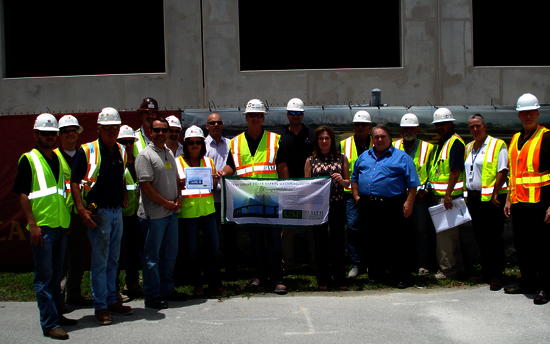 Some of the more frequent hazards that can be found on a project of this scale include trenching, falls, lacerations, chemical exposures, struck-by injuries, and bodily harm from lack of use or misuse of personal protective equipment. Stiles’ Safety Manager Ron Pangburn requested an on-site consultation from USF SafetyFlorida in March to ensure all employees are working in the safest manner possible. USF SafetyFlorida’s Gabe Garcia and David Ashman consulted with the company to help them manage the safety needs of the ever-changing worksite and to offer guidance on how to keep hazardous conditions to a minimum. Pangburn says the company already has scheduled its next consultation with Garcia and will continue to promote USF SafetyFlorida’s services to its subcontractors. “Working with both David and Gabe was a smooth and very professional experience,” he adds.

USF SafetyFlorida gives its Sunshine State Safety Recognition Award to Florida small businesses that demonstrate a commitment to exemplary workplace safety and health efforts. Stiles Construction received its first Sunshine State award earlier this year for its work on the new Publix at 18Biscayne, located in downtown Miami. To earn the award companies must receive an on-site consultation; correct any hazards, if found; and involve employees in the company’s safety and health efforts. To learn more about USF SafetyFlorida and the importance of workplace safety and health, visit www.usfsafetyflorida.com.