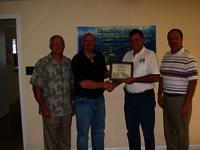 As most business owners know, sales and production periods are typically seasonal. There are times you can barely catch a breath and others when it's a great opportunity to conduct some housekeeping. For Gator Gypsum, this spring was a period when the company could further focus on its safety and health management system. As a result of its extra efforts, the company's Lakeland facility earned its first Sunshine State Safety Recognition Award.

Safety has always been a priority for the central Florida construction materials supplier and distributor. Matt Brooks, Gator Gypsum's safety director, said reaching out to USF SafetyFlorida for a complimentary safety consultation was a great way to take advantage of the slower construction season in March 2009. "It was a good time to educate everyone about our safety program, and it helps to bring in a different set of eyes. There were minor issues we corrected, and Jim (Jim Ulseth, USF SafetyFlorida consultant) helped me with recordkeeping and understanding OSHA regulations."

The added emphasis on safety was not entirely easy in the beginning. "We've always conducted safety meetings," says Brooks. The challenge for him was to make the sessions more engaging. "It's a teaching situation, not policing." By Brooks making the meetings fresh and informative--new presentation styles and quizzes--employees were able to retain more information and win cash prizes. He also made himself accessible to employees at all five branch locations. "Being out there and being available to the guys made a difference."

Brooks says the revitalized safety efforts are working. Employees are taking extra precautions and workers' compensation numbers are down. "Receiving the Sunshine State Safety Recognition Award "is a great honor," says Brooks. "It's better to pre-act than to react when it comes to safety."