(September 20, 2010)--Gate Precast, a manufacturer of architectural precast concrete building components, recently earned a Sunshine State Safety Recognition Award for workplace safety. This is the first award for the Kissimmee plant, which is based on 60 acres and employs 120 people.

The plant is part of Gate Construction Materials Group (GCMG), which operates eight concrete and precast facilities throughout the south. It was referred to the USF SafetyFlorida OSHA consultation program by fellow GCMG plant, Gate Concrete of Jacksonville, which earned OSHA's prestigious SHARP award last year and reduced its total workers' compensation costs by 40 percent since taking a more proactive approach to workplace safety. 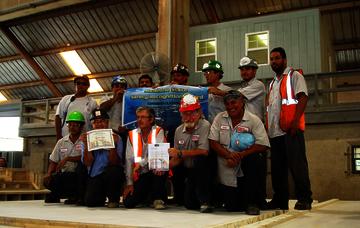 Enhanced safety efforts have now spread to other GCMG facilities. Mike Parker, Gate Precast's environmental safety manager, says the Kissimmee plant has come a long way. "In the last four years, we thought we were safe, but we weren't. We had a higher than industry average DART (Days-away, Restricted or Transferred) rate."

Fast forward to today and the plant has significantly reduced its DART rate below 1.0. "Now, even one near-miss incident is too much and scrutinized to prevent recurrence," Parker says.

In August, the plant received its first on-site consultation from USF SafetyFlorida's Pat Stark, and the company appreciates how Stark took a genuine interest in the company. "He wants to be a part of the solution of things that need to be improved rather than pointing out things that are wrong. I feel very lucky to have him on our side," Parker says.

Parker also credits management's safety commitment to their safety success. "Our priority is to provide a safe workplace. We have raised the bar regarding what we now consider acceptable from a safety standpoint. We all want to go home in good shape at the end of the day." As part of that commitment, the company has a safety culture that integrates plant-wide safety meetings and morning toolbox talks to generate safety awareness. "We put safety into a perspective that all employees can understand. Now, everyone wants to work safer."

While the Sunshine State award is a nice testament to its efforts, Parker says a SHARP certification is what the plant seeks next. "We're moving in the direction we want to move. We've got a way to go and with Pat's help, we're going to get there."