About the Chiles Family 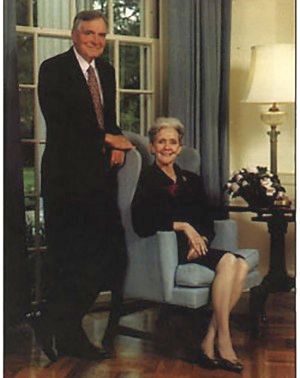 Rhea Grafton and Lawton Chiles were married in Lakeland, Florida, on January 25, 1951. The two shared a partnership in life and politics for more than 47 years. Governor Lawton Chiles dedicated nearly 40 years of public service to standing up for Florida’s children and families. A fourth generation Floridian, Chiles was a strong champion for our youngest citizens and a national leader on children’s issues. As Governor, he dedicated his service to “building a constituency for children” that promotes the well-being of Florida’s children and families.

A U.S. Senator from 1970-1989, Chiles fought for Medicaid reform initiatives such as the Women Infants and Children (WIC) food program and increased funding for prenatal care and childhood immunizations. Chiles also served as chair of the landmark “National Commission to Prevent Infant Mortality” which was established by Congress to provide policy recommendations for reducing the United States’ high infant mortality rate. Through public hearings held across the nation, Chiles helped focus the nation’s attention on the importance of early, quality prenatal care.

When Chiles was elected Governor in 1990, he put his national policy experience into practice and established Florida’s Healthy Start program to ensure that Florida’s moms and babies get the prenatal and infant care they need. Since the program’s inception in 1992, Florida’s infant mortality rate has dropped dramatically — falling almost 20 percent in the program’s first six years.

Even as Governor Chiles prepared to leave office in January 1999, his dedication to infant and maternal health continued. In 1997, The Lawton and Rhea Chiles Center for Healthy Mothers and Babies was established in Florida to continue research and improve services nationally.