In addition to novel surgical approaches, Doug Letson, MD (head of the department of orthopedic oncology), is working with Stryker Orthopaedics as the lead clinical designer of the Oncology Development Team for new prosthetic devices. Currently in development are new stems with porous coated bodies to enhance the bone-prosthesis interface. Furthermore, Dr. Letson is working with the development team on a new hinge that will allow better function for patients requiring a rotating hinge oncologic prosthesis. He is also collaborating with Stryker, designing a prosthesis that will promote greater soft tissue attachment to the oncologic prosthesis in an effort to speed recovery and improve the overall function of the limb salvage patients.

In addition to designing advanced prosthetics to improve soft tissue attachment, the surgeons at Moffitt are using vascular grafts and other dacron and Goretex materials to reattach soft tissues to the prosthesis. Using these grafts for soft tissue attachment significantly improves the strength of the reconstructed limb reducing dislocations and improving muscle function.

Another recent collaboration has been the development of muscle stapling devices with Ethicon Endosurgery. These staplers that are widely used in gastrointestinal surgery have been modified to allow transection of large segments of muscle and soft tissue The stapling device decreases blood loss and accurately identifies surgical margins for pathology analysis. In addition, the reliable staple line provides anchoring sites for reconstruction of the remaining soft tissues. 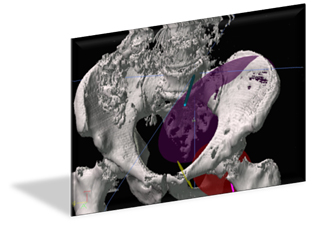 Dr. Letson and Dr. Cheong are working to develop a navigational system for musculoskeletal tumor surgery. Presently, the surgeons at Moffitt Cancer Center have performed over 20 complex orthopaedic oncology cases (such as, hemipelvectomies, total femur replacements, proximal and distal femur replacements) using navigation for limb salvage surgery and segmental prosthetic reconstruction. With the development of these new techniques for navigation, surgical resections are more precise and accurate by using fused MRI and CT scans. A more clear multidimensional image of the extremity allows more accurate surgical resections and easier reconstructions.

Moffitt Cancer Center has installed a Stryker Navigational Room specifically designed to improve limb salvage surgery and pelvic resections using the new navigation oncology software system. With this state-of-the-art navigation room surgeons perform complex tumor surgery with less complications and more accuracy. Accuracy and improved visualization are fundamental variables in procedures such as pelvic resections where exposure is difficult and vital anatomic structures are in close relationship with the tumoral mass. In addition to enhance the exposure of difficult anatomic regions, the use of navigation permits exact evaluation of limb length and rotation of components for procedures in the appendicular skeleton. In summary, with the use of computer-navigated systems we are improving limb salvage surgery and improving the accuracy of the resections and reconstructions. Patients have a higher probability of clear surgically resected margins with less risk of complications or damage to vital structures and pinpoint accuracy in reconstruction of the appendicular and axial skeleton. 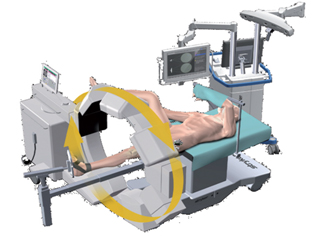 Moffitt Cancer Center / All Children’s Hospital are among the leaders in north America in pediatric limb salvage. The use of expandable prostheses for limb salvage in the pediatric population was first described in the early nineties. Initially, custom made devices required major surgeries to obtain the desired expansion, and in some instances, multiple procedures throughout the year were required. As technology advanced the lengthening of the device became easier and less invasive. The lengthening could then be done in an out patient surgical setting with minimally invasive surgery, less complications and faster recovery.

A novel technique has been developed where the lengthening procedures can be performed in an out patient clinic setting. No surgery and no anesthesia are required for the lengthening and the procedure requires 15 to 20 minutes. This prosthesis was developed by Stanmore in the UK, and works by a complex mechanism where a magnet activates the lengthening gears (in a similar way than the minimal invasive procedure using a conventional screw driver). For every 2000 revolutions of the magnet the prosthesis lengthens one millimeter. With this new technology the limb can easily be lengthened in short intervals to lessen the complications, and do not need aggressive rehabilitation after each procedure. There are no surgical incisions to heal and patients do not have any discomfort from the lengthening.

Moffitt Cancer Center has performed more than 40 of these limb salvage procedures in children, and roughly 25% of them have used the new non invasive Stanmore magnetic device. 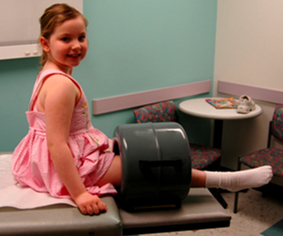 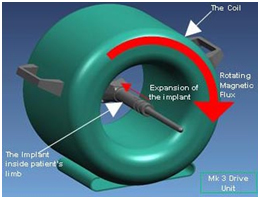